The maps show areas that may be flooded by over 30cm (one foot) of floodwater due to surface water. Areas at risk include sites of potential new housing as well as existing homes.

These maps have been produced by the Environment Agency to assist local authorities in planning development and for flood risk planning. Sadly they have not been released to the public or developers though they may be published in around a years time. Most people including councillors were unaware that these maps even existed

For the Weddington fields development site a large part of the West side could be flooded by over a foot of water. I am very angry that this map was not provided to campaigners at the time of the Weddington planning inquiry. Ahead of the release of the currently secret borough plan the developers seem to be targeting the areas of highest flood risk. 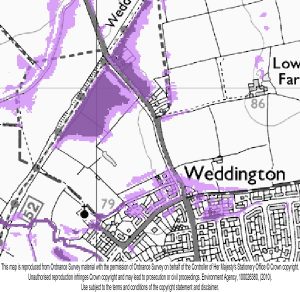 It is immoral to increase surface water flood risks when the local authority has a map of which areas need special care.

I have uploaded the detailed maps for Weddington and St Nicolas ward. This can be reproduced as long as the copyright/licence information is not cut off.