This may be the result of the Borough Plan inquiry, the Poplars Farm Planning application and/or pressure over past delays.

Below is the reported annual average of NO2 measurements from the automatic monitoring station {AQM2}, the 3 diffusion tubes that are co-located AQM2b and roadside/kerbside diffusion tubes NB1-NB41.

Ideally diffusion Tubes should be at head height between 1 and 5 metres from the kerb edge. These are the locations of the key tubes. You will see that many are too far from the road to detect accurately the NO2 from the traffic. 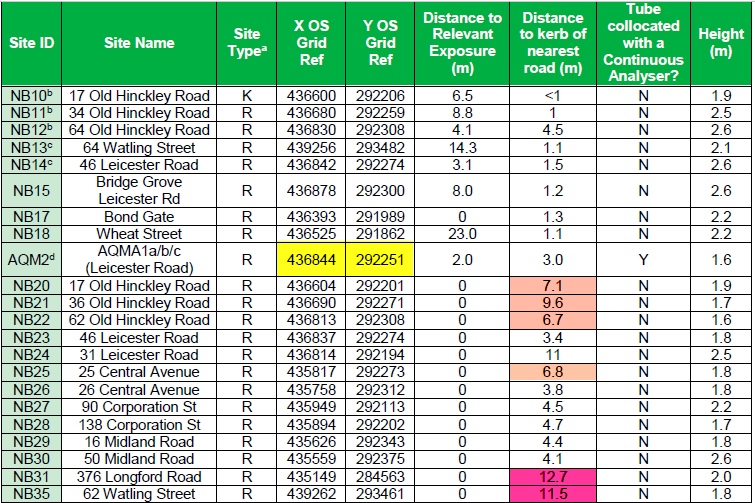 Strangely the location for the automatic monitoring station is recorded as being 11 metres (35 feet) from the location of the 3 co-located tubes.

The automatic monitoring produced a result every 15 minutes while the tubes have to be manually changed every 4 to 5 weeks.
The automatic monitoring station is the most accurate but large and expensive. On top of this are 3 monitoring tubes in order that a local calibration can be made between the two methods. There are then around 30-40 diffusion tubes place around the borough. These give a simple set of measurements each time the tubes are sent to the laboratory. There are however several adjustments to the numbers. Each year all the raw values from the tubes are scaled by a calibration factor. This can either be a locally calculated factor or a national one. They are calculated using the ratio of measurements from the diffusion tubes and automatic monitor(s). 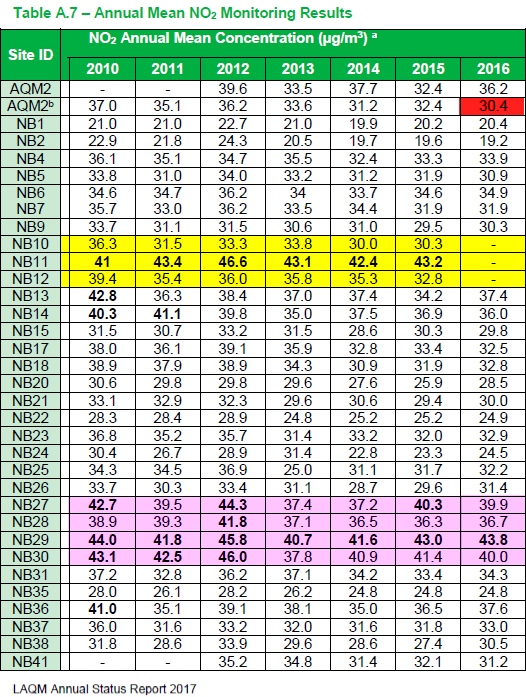 Sometimes diffusion tube data is not available for the whole year.  As there is a variation of pollution over each year it is not valid to just add an annual average value. The council have adjusted for the missing values using the ratio of period and annual means for other sites in the Midlands. This seems to have produced a very distorted value for the co-located tubes. Unfortunately the missing value adjustment in effect inserts 4 very low values into the assumed NO2 at the co-located site 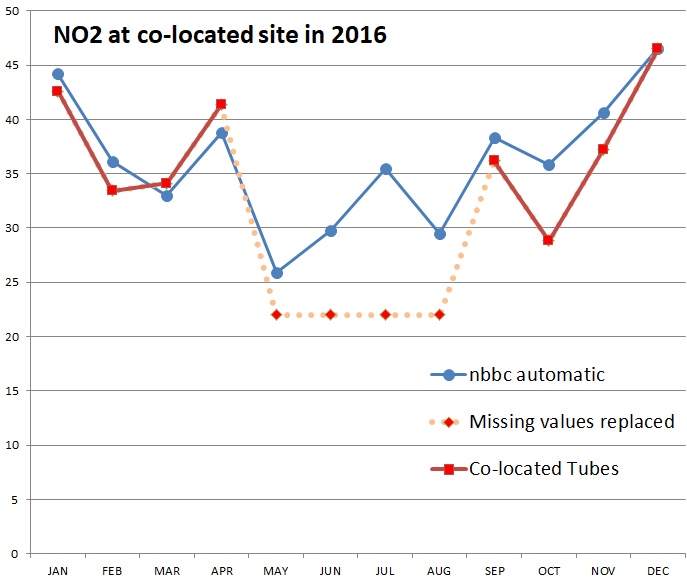 The 8 measurements from diffusion tubes in red average 37.5 but cover only 2/3rd of the year.  The calibrated and accurate automatic monitor has an average of 36.2 for the whole year and the average for the same 8 months of 39.2.  After in effect replacing the 4 missing values with 22.0 and multiplying by national calibration factor the final “calibrated” value for the tubes over the year is just 30.4.  That is how calibration gives a value that is 16% less than reference machine.  Remember AQM2 tubes with official annual average of 30.4 and automatic monitoring station with annual mean of 36.4 are in exactly the same location. 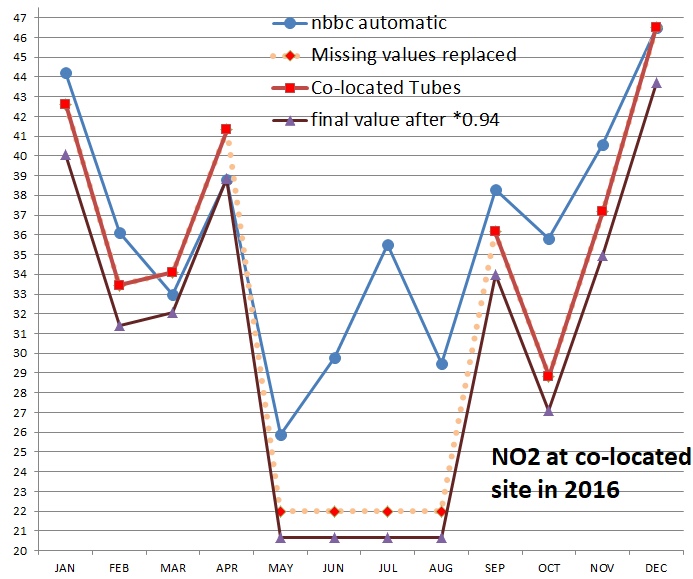 The automatic monitoring station is valuable in providing bias correction information for the measurements from diffusion tubes. Using diffusion tubes to measure NO2 has the risk that the measurements are biased due to numerous factors. In addition, there are significant variations in the measurements from tubes even when co-located. The bias correction factor is supposed to reduce bias in the readings when compared to the very accurate automatic monitor. The chart below shows the average NO2 measurements from the automatic monitor (in Blue) and co-located diffusion tubes (in green DT raw) over the last 5 years. I have shown the Councils reported adjusted level for the NO2 tubes in Red. The 2016 average for the tubes is shown adjusted for the 4 missing months based on local ratio as green line. The Orange dashed line shows the councils more severe reduction due to the correction shown in section above. What is striking is the council have selected a base correction factor which always reduced the level of red line. Remarkably the way the data is bias adjusted makes the data biased!

It is clear that the improvements before 2011 have not continued at the same rate. The system has had its kerbside monitoring (NB10, 11 &12) removed in 2016 just at the time when traffic impact of new developments is to increase. Many of the remaining monitoring tubes in the area are more than the recommended 5 metres from the kerb.

The highest measurements where obtained on the Lamp Post outside number 34 Old Hinckley Road (called NB13).  These are often well above the Legal limits (40ug/m3 average over the year) but the council talks about legal limits at receptors. It considers these to be people inside homes and places a few monitoring tubes on the walls of homes. Those which are set back get considerably less NO2 that on the pavements. At the start of 2016 the council stopped measuring the NO2 at NB13 but seems to have taken 4 frightening measurements again in October, November, December 2016 and January 2017. The chart shows the raw measurements and scaled down bias added values. 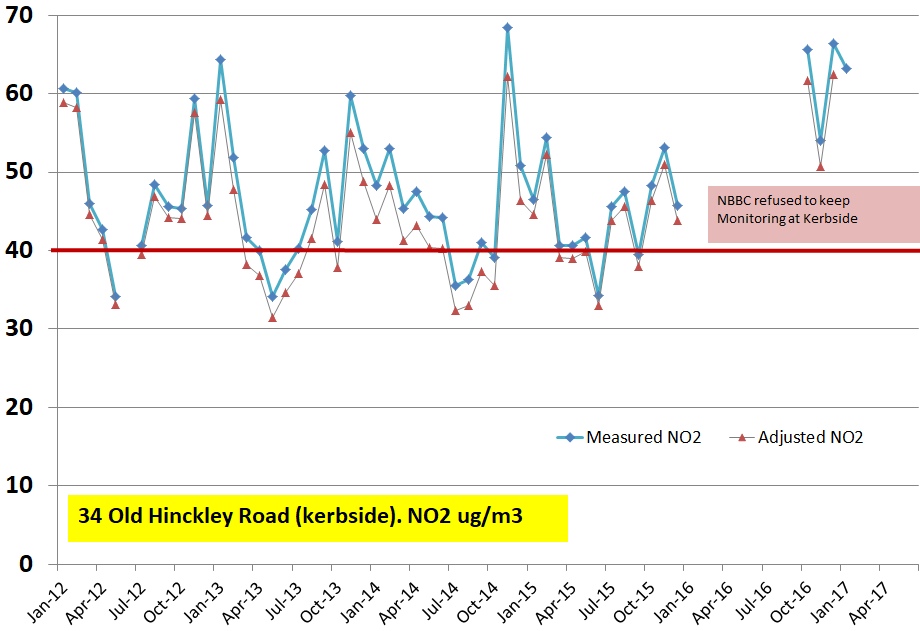 Round on the sharp corner from Old Hinckley Road to Leicester Road are diffusion tubes NB14 (close to road) and NB23 (on wall between 2 bay windows).  Pollution at both measurement locations show no clear sign of improvement since 2012.  Both sets of tubes have been reading around 50ug/M3 this winter. 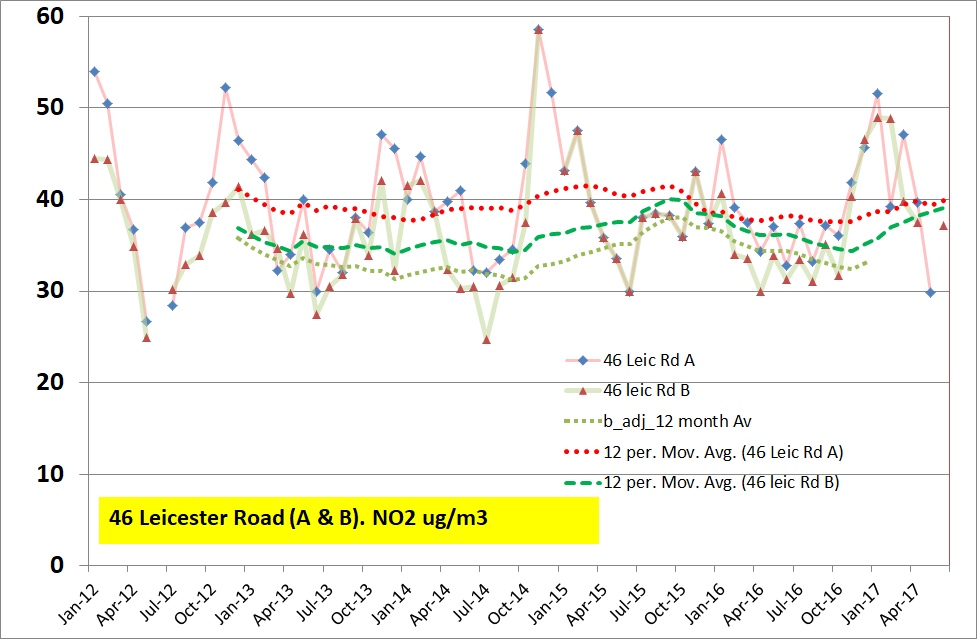 The air quality at the front wall of some homes in this area are well above the legal limit even after the council applies maximum bias adjustments. Levels on the pavements & carriageway will be even higher for those passing though. This is currently getting worse and the council is pretending the problem will just go away with cleaner cars and the Borough Plan. 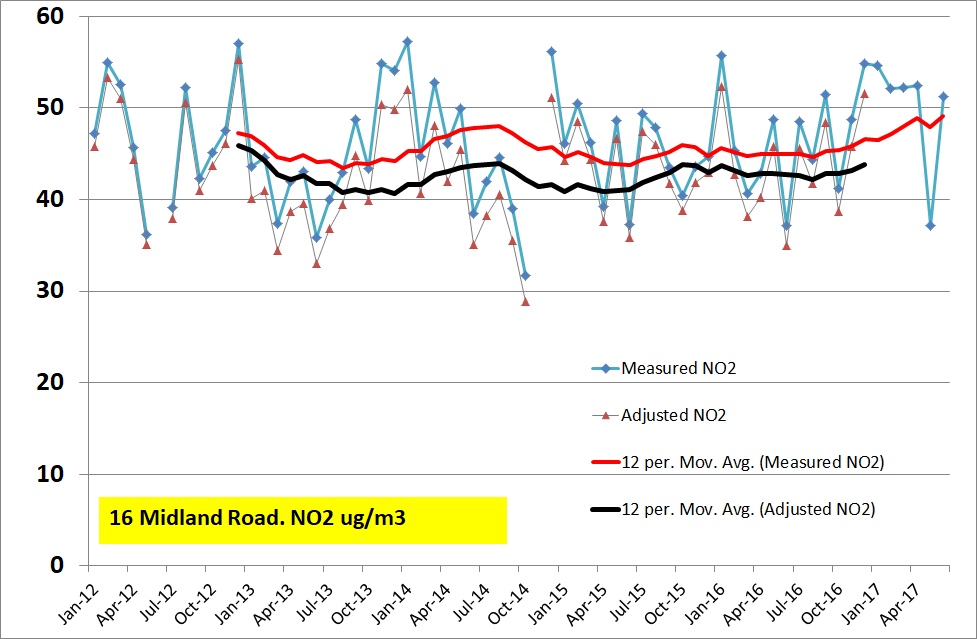 What needs to be done

The Council is currently doing far too little to reduce air pollution, it is pretending it is going away. The council is not breaking the Law but doing as much as it legally can to do nothing. It lets more pollution producing development happen with little or no sustainable transport improvements.

We need to revise the cuts to air quality monitoring and separate its management from those who are responsible for promoting more development.  We need a funded action plan not just a wish-list of things that never happen.

4) The scrutiny meeting about Air Quality is on our YouTube channel. see here

I am putting data and reports on a google drive but the council is banning publishing of monthly air quality laboratory reports.