The Sustainability Appraisal (SA) should be the foundations of a good local plan.  The SA even states:-

The current proposed Borough Plan is not sustainable. In fact it is hard to produce a worst plan. That is why I want to know if the SA was independent report to shape the plan or significantly changed under the instruction of the council to make the plan seem to pass the assessment. It is clear that the SA was produced at the end of the process.

When you look at the final scoring in the SA you can see why I suspect it is not as independent and objective as it should be. Out of 147 scores only 3 come out negative. 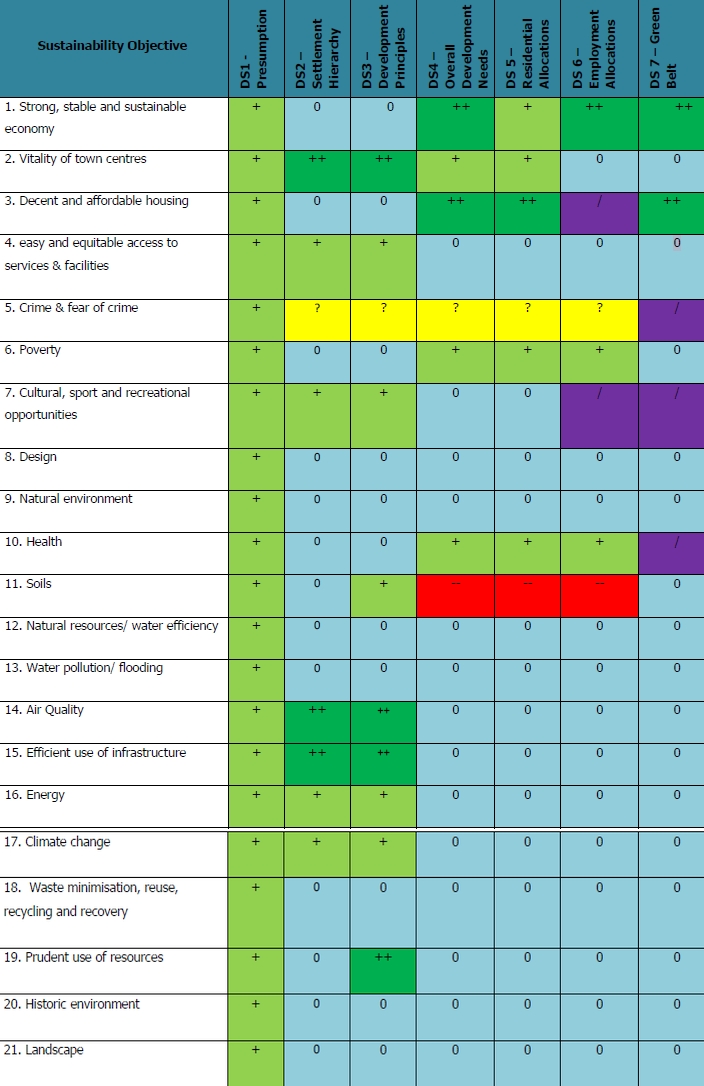 As a councillor I asked to see the original version of the report, that was refused and I was told to make a request under the Freedom of information act/ environmental information regulations (EIR). This was turned down at noon on last day consultation. I also had already put in a request for all correspondence with consultants.  This shows up a frantic period of editing in the middle of January.

Dear Keith,
I refer to your request to access documents as a Councillor in your e-mail of 13 February. Specifically, you have asked for a copy of the first draft of the Sustainability Appraisal and any earlier versions of the Viability Report which sits alongside the Borough Plan. I believe that both documents have already been requested under the Environmental Information Regulations, but that because there may be a delay in processing those requests, you have resorted to a Councillor request.
In terms of your request, I’ve looked at the Local Government Act 1972 and the Local Authorities (Executive Arrangements) (Meetings and Access to Information) (England) Regulations 2012 which set out the basic rights for elected members to access Council documents.  Amongst other provisions, the law provides – any document which is in the possession or under the control of a principal council (or Cabinet) containing material relating to any business to be transacted at a meeting of the council or a committee or sub-committee of the council (or an executive decision of Cabinet) shall be open to inspection by any member of the council. This would refer to the documents made available to committees (and Cabinet) either in the agenda, or as back ground documents. In connection with background documents, the legislation provides for additional rights in so far as a “document means any report or background papers, other than that only in a draft form, taken into consideration in relation to an executive decision”.
As I understand the position, the draft documents you have requested aren’t background papers to a report that came before a meeting, so I can’t see any statutory right to inspect and receive the documents.
There are, however, common-law principles that also need to be taken into account when assessing your request. Under common law principles councillors have the right to access information held by their authority where it is reasonably necessary to enable the member to properly perform their duties as a councillor. However, if the councillor’s motive for seeing documents is indirect, improper or ulterior this may be raised as a bar to their entitlement. Councillors are not, therefore, allowed to go off on a ‘fishing expedition’ through their council’s documents. If a councillor is a member of a particular committee or sub-committee, then they have the right to inspect documents relating to the business of that committee or sub-committee. If not a member of that committee or sub-committee, the councillor would have to show good cause why sight of them is necessary to perform their duties.
At present, based upon what you have told me, the reason that you wish to see the documents is: “The suitability appraisal and Viability Assessment potentially may have been seriously modified since their authors submitted the original versions to the council. Given what is going on with the doctoring of report on air quality issues, it is not unreasonable to request that they are immediately released.”
In other words, you are looking to establish whether the Council has manipulated reports from its consultants. At this stage, I am inclined to say that this of itself may not amount to a good cause to justify disclosure. It is, to coin the phrase, a “fishing expedition” looking to find errors or inconsistencies between different versions of the documents. I have no doubt that there will be differences, which is why multiple versions arise. However, I cannot envisage how disclosure, in such circumstances, falls into your remit as a Councillor. If you have evidence to make an allegation against an officer, there are prescribed procedures that you need to follow, as set out in the Officer/Member Protocol in the Constitution.
The Council has published its evidence base to support the Borough Plan proposals and it is those documents that are the subject of consultation, not superseded drafts. At this stage, I would suggest that you are not entitled as an elected member to the requested documents as the reason for the request is predicated upon as yet unfounded allegations of malpractice. That said, there is an ongoing investigation into the allegation raised by you that the Air Quality Management Report was improperly amended. If the investigation concludes that improper manipulation has occurred may legitimise your request to see other earlier drafts of other documents. At this stage, however, until the investigation is concluded, I cannot see how sight of these documents can be justified under your common law rights. I’m afraid you will have to wait the outcome of your EIR request.
Regards,
Philip Richardson
Director – Governance & Recreation

Thank you for your request for information about FOI Planning Policy.

Your request for information has been considered and I hope the following will answer your query:

I refer to your request dated 16th February 2017 for draft versions of the Sustainability Appraisal and Viability Report.

You have also stated that ‘The (sic) Sustainability Appraisal and Viability Assessment potentially may have been seriously modified since their authors submitted the original versions to the Council. Given what is going on with the doctoring of the report on air quality issues, it is not unreasonable to request that they are immediately released.’

Following careful consideration, the information requested is being withheld as it is considered that the exemption at regulation 12 (4) (d) of the Environmental Information Regulations 2004 is engaged in that your request involves material which is still in the course of completion, to unfinished documents or to incomplete data.

The Information Tribunal has confirmed in the following cases that a draft document is considered an incomplete document even after the final version has been completed:

There is strong public interest in the Council being open and transparent in its activities, particularly those that have an impact on the environment in order to allow for effective public participation in decision making. The Borough Plan is a matter of significant public interest and it is important that the public are provided with all relevant information to enable them to engage with the ongoing consultation process.

To place old or superseded information into the public domain which is inaccurate can lead to confusion, mislead the reader and lead to misinformed debate. The significance and effect of the recommendations of the finalised and complete reports that have been published and are currently out to consultation should be the focus of any public debate. Disclosure of draft versions would have the effect of distracting from the important consultation exercise and is likely to deflect the discussion away from the Borough Plan itself, to focusing on changes made between versions of the documents. This could be quite damaging in terms of the delay in delivering the plan both to the Council and the public, particularly with the threat of government intervention. It may harm the Council’s interests insofar as it may delay or adversely affect the plan-making process and would be misleading and potentially deprive the public of the opportunity to respond to the actual proposals.

There has already been a certain amount of diversion and distraction in respect of draft versions of documents provided by the Council. In the spirit of openness, the Council released draft documents in respect of air quality. Attempts have been made to exploit differences in versions of this document by the release of a misleading press release where it has been alleged that Council officers have manipulated reports, and at a recent public meeting comparison between the draft and final documents was highlighted with a view to derailing the debate, causing distraction and generally undermining the process. In providing the draft documents on air quality, the Council made it very clear that the differences in documents were necessary, explicable and reasonable as they correct a number of errors and false statements within the draft documents and that, in the light of this, the draft versions should not be taken out of context. Despite this, the draft documents have been misused as evidence of alleged wrongdoing and an internal investigation is ongoing to determine the veracity of such allegations. The creation of misperceptions by certain parties with a different agenda is both divisive and extremely unhelpful at a time when the Council is actively seeking public engagement with the consultation process. It has led to some media speculation and may ultimately undermine public confidence in the Borough Plan, even though, as yet, there is no basis for any such conclusions to be drawn.

If you are unhappy with the way the authority has handled your request, you may ask for an internal review. Under regulation 11(2), you must contact us for a review no later than 40 working days after the date of this letter.
…….

Thank you for your emails and associated final comments on the SA report and matrices.

I trust the above update/clarification is useful and thank you again for your observations and thoughts xxxx.

Yes – i will get a final version ready for 9am – Monday.

Are you able to address these points before 9am on Monday which is the deadline for print?

I just speed-read the final SA (track changes version), with the following comments:

I will speed read read the appendices tomorrow and contact you with any further observations.